Introducing The Craving Cure: An Excerpt 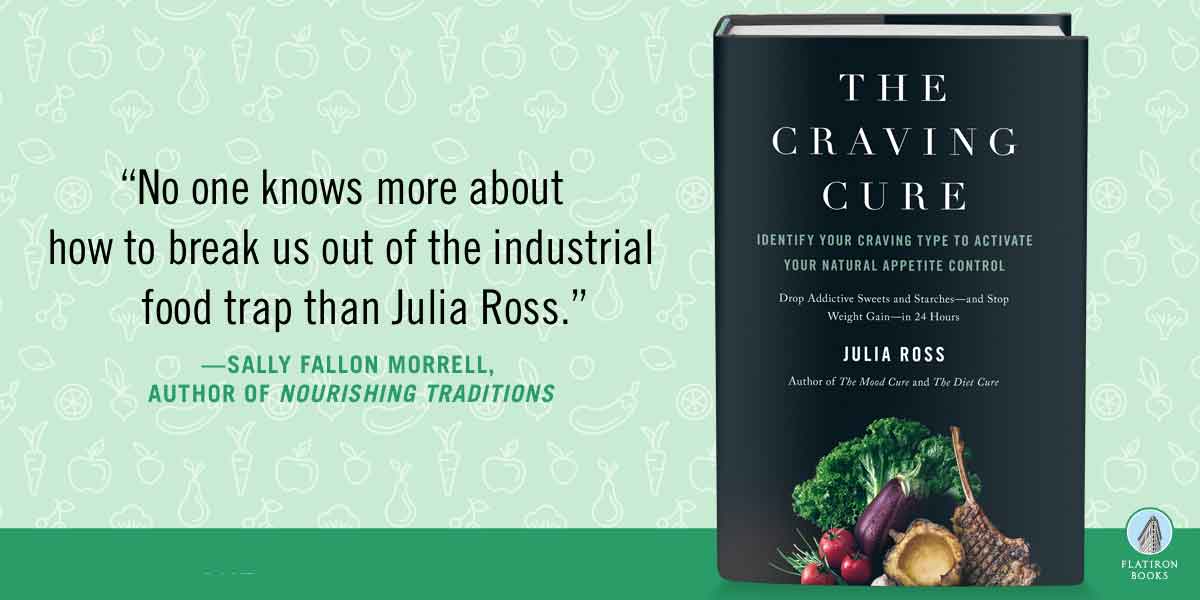 Like most Americans, you’re probably, looking for answers to three of the most desperately asked questions of our time: “Why can’t I stop eating the wrong food?” “Why is my weight still out of control?” And “Is there any safe and permanent solution?” The Craving Cure gives you definitive, complete answers to these questions and shows you, step by step, how to end the struggle, take charge of your own appetite, and stop unnatural weight gain. But, first, let’s dispose of some of the wrong answers:

Since the onset of the weight-gain epidemic more than fifty years ago, thousands of experts have dispensed advice, some of it very good, about how to eat, think, feel, exercise, or meditate to cope with what has now become a worldwide public health crisis. Yet the increasingly frantic public has found that, year after year, the new approaches never quite solve the problem. Why? Because none of these approaches has ever addressed it.

The problem is not that we’re misinformed, mindless, or undisciplined. The problem is that we belong to a nation of cravers—involuntary consumers of the most addictive substances ever known. Only if our cravings for these substances are silenced can we return to our former eating habits—the ones that, until just a few decades ago, had kept us fit throughout human history.

How would I know? I’ve been a specialist in eating disorders, addiction, and nutrition for more than thirty years, directing programs specifically for food cravers in the San Francisco Bay Area since 1983 and training health practitioners from around the world since 2004.

THE PRINCIPLES OF THE CRAVING CURE

The elimination of cravings is the critical missing key in our struggle to free ourselves from the wrong food, the wrong weight, and the wrong health. The Craving Cure provides that key, forged from everything I’ve learned in the last thirty years through research in neuro-nutrition and from the real life experiences of the thousands of clients who have been through the programs at my clinics. Here are its essential elements:

THERE IS AN EXPLANATION—AND A SOLUTION

Food cravings come in all sizes and strengths, from the vision of chocolate that lingers for hours until we finally succumb, to the unstoppable drive-to-the-store-and-eat-it-all-in-the-car variety. Cravings have nothing to do with real hunger or the need for nourishment. They are blind, brain-triggered drives for a chemical “fix” that only carefully constructed high-calorie, drug-like foods, the bombs, can temporarily supply.

Cravings were not our problem until just a few decades ago. Then, in the 1970s, we made three reckless dietary shifts that have since catapulted us into an international weight-gain spiral and set in motion the greatest nutritional crisis of all-time. This crisis is propelled by the endless procession of increasingly sophisticated confections. All of them are scrumptious, but they are not foods. They are specifically formulated to create explosive cravings at the expense of our health and weight. Not understanding the distinction between real foods and drug foods will certainly keep you from losing unneeded weight. It could also kill you. The rates of diabetes and other diet-related diseases are rising in direct parallel with our intake of food-like products that are simply unsafe for human consumption—but impossible to pass up.

Part I of The Craving Cure explains how and why most of us have become overweight, sick, and riddled with cravings. But its value is limited if all you can think about is a Snickers. That’s why Part II takes you right to the actual site of the problem. That problem is not located at your waistline or in your taste buds. That problem is in your brain. This powerful organ, which is supposed to be controlling your appetite, has been turned against you. Time to call in a neurologist? Not at all. The repair work needed to get your brain back in gear is a do-it-yourself project. By taking the Craving-Type Questionnaire that follows this introduction, you will quickly discover which of the five types of brain-generated cravings you have. Then, you’ll read the chapters in Part II that apply to any of the Craving Types specific to you. In Part III, you will learn how to make simple but potent nutritional repairs tailored to your own brain’s needs. Once you’ve started taking the nutrient supplements called amino acids that are indicated for your Craving Type, you’ll start experiencing life without cravings, overeating, or weight gain, on the first day.

Our clients, thousands of them over the past thirty years, typically call in with the same one-word report after their first day on their brain-targeted nutrients: “Amazing! My cravings have disappeared.” It soon becomes evident that their weight gain is disappearing, too, often as much as ten pounds in the first two weeks, and after that at a steady, sustainable clip. Without cravings, Part IVs Craving-Free Eating options (including one specifically for diabetics) are easy to implement. You have very little to lose but everything to gain. Except weight and disease.

WHAT ARE AMINO ACIDS?

An amino acid is a protein. There are twenty of them. We get lots from high protein foods like steak and eggs and some, but fewer amino acids from nuts, beans, and grains. Junk foods contain almost none. Amino acids are called “the building blocks of protein” because they are used alone or in hundreds of combinations, like multicolored bricks, to build every structure in the body, including the brain cells that control our appetites.

This may all sound very intriguing, but after so many diet experts have made you promises they could not keep, why should you believe me?

I have been directing programs in the eating disorders and addiction fields since 1980. From the beginning, my programs provided all of the best conventional recovery strategies. But, much to the disappointment of all of us in these fields, they most often failed. That is why I began experimenting with nutritional strategies. Over 4,000 overeater and bulimic clients have since come to my clinic and benefited dramatically from these strategies. As a result, I am now one of a small group of world experts in the field of applied neuro-nutrition; the care and feeding of the powerful brain neurotransmitters that control how we feel emotionally as well as what we crave. As this point, after all my experiences with the clients in my clinic and the successful case reports of hundreds of health practitioners who’ve gone through my trainings, I can honestly say that the strategies in this book are virtually fail-proof.

Although I’d begun to be aware of the new research on addiction and the brain when it first emerged in the early 1980s, it wasn’t till 1985 that I was introduced to several studies authored by Kenneth Blum, Ph.D., one of the leaders among the neuroscientists focusing on addiction research. He had documented a brain-targeted nutrient treatment process that seemed to be able to heal the addicted brain using a few individual amino acids from which the brain could make its powerful appetite- and pleasure-generating neurotransmitters. When the targeted brain sites were supplied with supplements of these particular amino acids, his study subjects, all addicted to either alcohol or cocaine, consistently experienced relief of the cravings and negative moods that had always lead them back into their addictions.

I asked the nutritionist at my clinic to implement a pilot study of Dr. Blum’s amino acid approach and we found it to be just as effective as we had hoped. So we began to try it in our new program for overeaters and bulimics. The results were nothing short of miraculous. Eventually, we started trialing the amino acids during our very first sessions with these clients—and saw their food cravings disappear even before they walked out the door. Their supplements had helped eradicate their cravings even before they had made any dietary changes. In fact, we don’t let our clients change their diets until their cravings, the ones that have defeated their every prior attempt, are gone.

Millions of people have been working hard to “get their eating habits on the right track”—yet those same millions fail, again and again. The reality is that no system of dietary restriction yet devised has been able to combat our drive to consume our favorite treats. In fact, it turns out that dietary restriction is often a biochemical boomerang that sets off rebound cravings and weight gain by disrupting genetic, metabolic, and hormonal regulation, as you’ll see in Chapter 4, “The Weight-Gain Pandemic: Its True Causes and How the Craving Cure’s Approaches Can Help.”

It is true, of course, that you will have to change your eating habits. But after just twenty-four hours on the right amino supplements, you’ll want to. You won’t be craving junk foods, so not eating them will be easy. You will be eating more protein (which is composed of amino acids) and more traditional saturated fats (which, happy surprise, are not weight-promoting or heart threatening, as you’ll learn in Chapter 3) as well as traditional carbohydrates (depending on your tolerance). You’ll also be eating more calories than you would imagine. In other words, you’ll be eating the diet of normal-weight people everywhere before 1970.

Though undeniably amazing, the amino acids are intended only to make us feel satisfied with the traditional foods that our normal-weight ancestors enjoyed for so long. Typically, after two to twelve months, our clients can dispense with the amino supplements altogether. By then they’re relying solely on the aminos they get from their anti-craving foods, bolstered by the secret wisdom of the “three squares” and other nearly extinct but essential traditional eating practices. The recipes and menus section will come in handy here. What you will not find in The Craving Cure is a low-calorie, low-fat, or low-protein diet.

Every chapter of this book is aimed at helping you to eliminate highly addictive, industrially designed edibles from your life. But don’t expect to live with feelings of deprivation. It would never work! Once on your program of amino acids and anti-craving foods, you’ll feel fine without the old treats. Without them, the rich supply of nutrients in your now consistently wholesome cuisine will work to restore your health and allow your body to reveal its true weight.

The Craving Cure is the key that can return you to your birthright: your natural appetite, your natural health, and your natural shape. I hope that you’ll turn this key in the lock and come home.

Take the first step by turning the page and filling out the Craving-Type Questionnaire that will open the way to your craving-free life.